Garbage Disposal Leaking from Bottom: Here’s How to Repair

Plumbing problems are never fun, and a garbage disposal leaking can be beyond annoying. But before you call a plumbing professional out for repairs, let's do some quick checks to see if your unit is fixable, and to help you determine your best course of action.

There are three common areas where a garbage disposal will leak: The bottom, top, or side. Where the leak orginates is a good indication of the seriousness of the problem. Many times the required repairs aren't with the garbage disposal unit itself, but rather the surrounding plumbing.

Water travels, so it's possible that your disposal is actually leaking from the flange or dishwasher / drain plumbing, and is only dripping from the bottom. Use a paper towel to dry off your garbage disposal and then watch closely to see where the water is leaking.

Whether your garbage disposal is leaking from the reset button, screws or holes on the bottom, the issue is the same. You have a serious problem that, most likely requires a new garbage disposal.

The most common cause is a damaged internal seal within the unit. Garbage disposals use internal seals to protect the motor and/or prevent the appliance from leaking. Over time, these seals wear out and are no longer able to perform their intended purpose.

Another possible cause, is a crack in the protective shell case that surrounds the garbage disposal. But regardless, whether your unit is leaking because of the case or an internal seal, you'll need to purchase a new disposal. 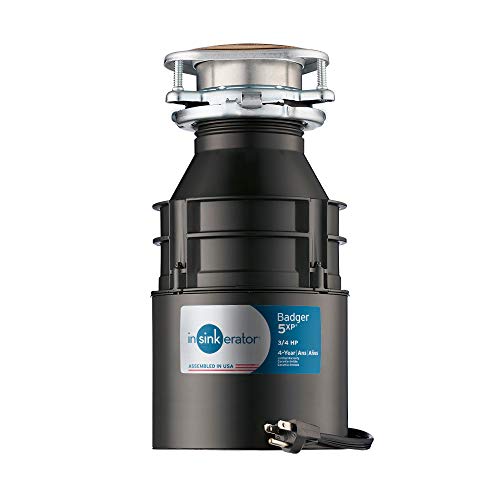 The Insinkerator Badger 5XP is a 3/4 horsepower garbage disposal. It's a customer favorite because of it's low price and "easy swap" installation design.

When this is your problem, your options are pretty limited. Keep in mind that water and electricity don't mix, so you'll want to get this repaired as soon as possible.

Your only real solution is to purchase a new garbage disposal. You can expect a new disposal to last between 8 to 15 years, depending on the amount of use and the quality of the appliance.

Garbage disposals such as the Insinkerator Badger 5 aren't too expensive, and are designed to be an easy replacement and work with your existing plumbing. You'll likely spend around $400 between parts and labor if you hire a plumbing professional to install it for you.

Many homeowners prefer to do the installation themselves to save money. If you do choose to go this route, you'll want to purchase a garbage disposal that comes with an electrical cord, unless you want to hardwire the unit to your electrical panel.

If your garbage disposal is leaking from the top, the problem may not be your disposal at all! It could be caused by the sink flange which connects to the mounting ring of your disposal unit.

The flange is the visible part that surrounds the drain hole in the center of your sink. Most flanges are sealed with a clay-like sealant called plumber's putty to prevent leakage. Although, not as common, there are some disposals that use screws to tighten the flange in place.

Over time, the plumber's putty can break down, (or the screws may loosen) and the sink flange is no longer able to make a water tight seal. This can also happen when other plumbing repairs are being done under the sink, as the garbage disposal may be hit or dislodged enough to compromise the seal.

Plumbing repairs can also be the cause of a disposal unit leaking from the side, as homeowners sometimes forget to disconnect the dishwasher's drain plumbing that connects to the garbage disposal before pulling their dishwasher out for repair.

Although fixing this problem isn't difficult in theory, it can be a big job, especially if you're not comfortable working with plumbing. In order to make the repairs, you'll need to remove the garbage disposal and re-seal the sink flange with plumber's putty.

We know, it sounds easy, but hiring  a plumbing  professional is the choice many homeowners choose. However, if you're an avid DIY'er and want to save a couple of dollars, here's what you'll need to do:

Garbage Disposal Leaking from Side

If your garbage disposal is leaking from the side, the problem is typically either the dishwasher drain or the main drain line. In most cases, this is a relatively easy repair that you can do yourself without calling a plumbing professional.

Not all disposal units utilize the dishwasher drain, so if you do not have a dishwasher, you won't need to worry about this problem and you can simply focus on the main drain line.

What to Do When Your Garbage Disposal Leaks from the Side

If you have a screwdriver on hand, you can most likely repair the leak yourself without calling a plumbing professional.

Since the small hose connects to the dishwasher drain, the leak is most likely because the metal clamp isn't secure and water is travelling down the side of the unit. Take your screwdriver and tighen the screw on the clamp. This should secure the hose and will usually stop the leak.

If your dishwasher drain is still leaking, the problem may be a warped or cracked hose fitting. In which case you'll need to replace the hose. Although this isn't difficult, you can always call a plumbing professional or handyman to make the repair.

You may be able to stop the leak on the main drain line hose by tighening the screws on the metal plate that connects the hose to the unit. But if that doesn't work it could be a gasket.

Tips For Home HVAC Maintenance During Every Season

How Do I Choose a Tankless Water Heater for my RV?