What to Do When You Have A Smelly Garbage Disposal

There's nothing worse than a smelly garbage disposal! But you might be suprised to know that there's a good chance you'll be able to fix the problem yourself. In fact, you probably already have the supplies in your kitchen.

There's  number of reasons why a garbage disposal may smell. It could be a serious problem where you'll need to contact a professional, or something fairly simple. Here are a few of the causes of a smelly garbage disposal:

Using citrus isn't going to solve a smelly garbage disposal that's caused by rotting food. However, it can resolve some minor problems, and it's a great way to freshen up the disposal's smell.

Since harsh chemicals should never be used in your garbage disposal, lemons are an excellent natural alternative. They won't harm your household plumbing and they're good for the environment.

The citrus in the lemon can help break-up odor causing particles within the grinding chamber. Best of all, lemons will leave your garbage disposal smelling fresh and clean.

Although, citrus is not the strongest solution to disposal odors, it's an excellent method to use periodically, even when you don't have a problem.

This simple method is a great task to complete, even if your disposal doesn't smell.

The garbage disposal needs to be running when you remove the stopper. This will allow the disposal to draw in the hot, soapy water, which will loosen and flush away any food residue. It should also help clean the grind ring, which often develops food build-ups.

If the hot, soapy water didn't solve your stinky garbage disposal problem, you can try grinding ice cubes with salt.

As the ice cubes are being ground, they break into thousands of tiny pieces that hurl against the sides and components of the garbage disposal. Together, with the salt, they break-up and scrub the upper tank and sides of the disposal.

If your garbage disposal still has an unpleasant odor, try using baking soda and vinegar. This trick has been around for years, and it's very effective.

When the baking soda and vinegar are combined, a chemical reaction takes place that causes them to fizzle. The reaction creates carbon dioxide and water, which will snap and pop thru food debris, causing it to break apart and loose it's grip.

When you turn your disposal on, and run hot water, it further disrupts the odor causing source and flushes it down the drain. This reaction helps loosen food built-up and/or the food debris that's causing the odor within the grinding chamber.

It's always easier to prevent a problem than it is to fix one. The same is true with stinky garbage disposals. Here are a couple of suggestions to prevent future odors from developing in your disposal:

Many people think that the minute the food waste has been ground up they can turn off the disposal. But the truth is, there's still food debris inside. Even if the food was completely ground, it hasn't been flushed out of the disposal yet.

Often food sticks to the side of the disposal's grinding chamber or becomes stuck on the grinding plate. If you're done using your disposal for the next couple of days, the food that's still left inside can rot and begin to smell.

The best thing to do, is after you hear the grinding stop, allow the water and garbage disposal to run for another 15-seconds. Then, turn off the disposal and leave the cold water running for 60-seconds. This will flush all the food particles thru your disposal and drain, which will prevent odors from developing.

There's a product on the market called Bio-Clean that's recommended by many plumbers. Bio-Clean uses enzymes and natural bacteria that have not been genetically engineered. This video shows how it works:

Simply pour Bio-Clean down your drains once a month, and let the enzyme concentration (the most powerful on the market) do it's work.

It'll not only prevent your garbage disposal from smelling, but it'll also keep your drains in good working order, by preventing drain clogs and unpleasant odors. 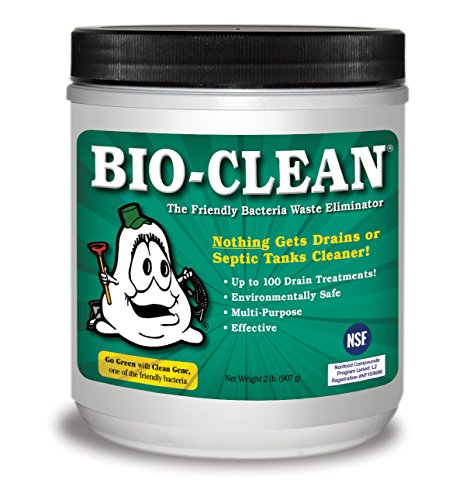 Tips For Home HVAC Maintenance During Every Season

How Do I Choose a Tankless Water Heater for my RV?